We are going to see how to organize the elements in the flash framework.There are various groupping ways of objects, and clasification in flash. They are:

They are the first level group. They are essential for the basic figures into more complex drawings.

For example, the house:

Can be used to tag different levels (in depth) in the scene. Organizing the actors in depth. The window is: 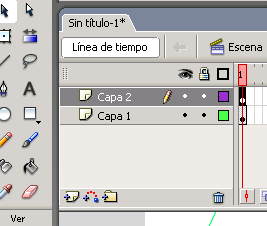 It can be grouped in directories, and buid layers with

Too we have the symbols, eye-lock-square: